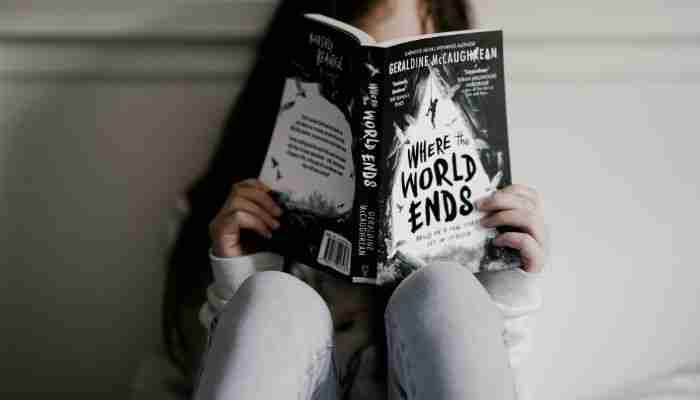 Struggling to find decent chapter books for 7 year olds? This list should help. Depending on the reading level of your child, most of the books will work just as well for 6 to 9 year olds too.

My daughter loves a good story and snuggling up in a blanket and reading together has been a central part of our nightly routine for over 6 years.

But she threw me a curveball recently when she announced breezily one night that she didn’t need me to read to read to her anymore.

‘Ur, ok, great’ I said, as I darted into the loo for an impromptu cry.

And it was all Mr Gumm’s fault.

Yes, Mr Gum, You ARE a bad man. You have made my child want to read ‘ahem’ independently from ME. *Humph*.

Seriously though, I was proud of her really. Reading a chapter book alone is a huge milestone in a child’s development and Andy Stratton can take the credit in my daughter’s case (author of the Mr Gumm books).

My daughter belly laughs whenever she reads Mr Gumm (even Roald Dahl and Dr Seuss can’t do that!) and she’s started to get her friends reading them too.

So thank you Mr Gumm. You’re not really a bad man after all.

Here are 21 chapter books for 7 year olds that will supercharge bedtime reading, keep them engaged and foster their love of reading.

You’ll find a mix of modern and older classics, as well as some books I hope will prove completely new editions to your bookshelf.

My daughter can’t get enough of Mr Gum. She laughs out loud on every other page! But beware. Mr Gum is pretty horrid. Oh and he hates children.

With literally thousands of 5* reviews on Amazon, author Jeff Kinney is clearly doing something right.

Many of my daughter’s 7 year old male friends love the Diary of A Wimpy Kid, so if you’ve got a son who runs a mile from many of the ‘girlier’ chapter books, you might want to try these.

The trials & tribulations os a skinny kid in middle school are brilliantly documented in both words & pictures.

Enid Blyton has had a few knocks over the years for being racist and not the best writer.

Whatever you view, the wonderful world of The Faraway Tree collection is pure joy to most 7 year olds (and this 40 something mum). It’s pure old fashioned magical fun that fuels the imagination and my daughter loves them.

Meet Mildred Hubble. She’s in her first year at Miss Cackle’s Academy for Witches. Unfortunately, she’s rubbish at being a witch. She can’t ride her broomstick, she gets her spells all mixed up and she’s already got an arch enemy to deal with.

A modern classic, Jill Murphy’s Worst Witch Chapter Book Series are an absolute hit with most 6, 7 and 8 year old girls.

5 – The Lion, The Witch and The Wardrobe

Whether you choose to read The Chronicles of Narnia as a fairy tale or a retelling of Christian tales from the Bible, it really doesn’t matter.

C. S. Lewis’ The Lion, The Witch and The Wardrobe is a fantastic book on any level and it’s got all the ingredients children love – mythical talking creatures, good versus evil, a nasty old witch and of course, children who save the day.

My daughter came home one day and requested this for Christmas. I’d never heard of it, but she absolutely loves it. It’s ‘kind’ of like Night At The Museum, but with kids.

The main character Will enters a mysterious portal, where he’s transported into the World of the Night Zoo and tasked with protecting the Zoo’s creatures from the evil Lord of Nulth and his army of robotic spiders, the scary Voids!

I defy anyone not to love a bit of Roald Dahl!

He’s one of the all time favourites in our household and my daughter can’t get enough of George’s truly revolting concoctions. Not to mention Grandma shooting through the roof in glee after she has just a little bit too much medicine!

A true master of storytelling, Roald Dahl also has many other wonderful, whiz poppingly good classics for your child to try.

Astrid Lingren’s Pippi Longstocking was pushing girl power long before the Spice Girls were even born!

With her flaming red pigtails, no parents to tell her what to do, a horse that lives on her porch and a habit of getting herself into one outrageous scrape after another (and somehow always  coming out unscathed), Pippi Longstocking is a timeless classic and a ripping good yarn!

One of the world’s most loved children’s novels, E. B. White’s wonderful book Charlotte’s Web is a touching novel about friendship, love, life, and death. Oh and a spider of course! The film version with the voice of Julia Roberts is also lovely and enough to make a grown man cry.

Lewis Carroll’s Alice In Wonderland is one of the most famous and loved children’s classics of all time. And for good reason. They simply don’t write them like this anymore.

Frankly, it’s bonkers. But brilliantly so. And Alice’s slightly indignant and moralistic approach to everything makes her an engaging character to follow through the rabbit hole and beyond…

I’m fascinated by Dr Seuss. His books were way beyond their time and the messages in many of his books are utterly compelling and very powerful.

His madcap writing style is also very engaging and my daughter absolutely loves reading the voices with me as the narrator. Horton Hears A Who is one of his lesser known books, perhaps, but it’s a great one and it’s pretty much about a world that lives in a speck of dust! (Although it’s technically not a chapter book at all!)

British comedian, David Walliams, has been touted by some as the next Roald Dahl. Whilst I’m not ‘quite’ sure about that, his books are nevertheless pretty good.

Mr Stink was the first Walliams book we read in our house and I think it’s our favourite. It’s a lovely story of a child’s relationship with a homeless man and a powerful lesson in not judging a book by it’s cover (no pun intended).

So many of today’s chapter books are superficial drivel (sorry, but they are). You won’t find any of that in a Jaqueline Wilson book. She’s got a British OBE for services to kids’ literature, plus she was also the highest-borrowed author in British libraries in the last decade.

She deals with real themes and issues in many kids’ lives head on and Sleepovers is no different in it’s sensitive approach to a little girl who is worried about her friends’ reaction to her sister, who has special needs. Enjoyable, easy to read and all about real life.

P.L. Travers Mary Poppins has taken a bit of a back burner to the Julie Andrews film, which has become more famous than the actual book.

But the book is a good one and a timeless classic. Just don’t expect the sanitised, loveable Julie Andrews nanny of the Disney film. Mary Poppins is much harsher in the actual book. She can still fly though:)

Bizarrely, Harry Potter hasn’t captured my daughters imagination yet, but many of her friends are working their way through the whole series quicker than you can say ‘Wingardium Leviosa’.

Some of the later Harry Potter books might be a little dark for some 7 year olds, but Harry Potter and The Philosopher’s Stone (retitled as The Sorcerer’s Stone in the US) is a brilliant introduction to the magical world of Harry Potter, as he discovers his true birthright and battles the evil Lord Voldemort.

This is the book that inspired the hit movie (which is also very good!)

Cressida Cowell’s loveable Hiccup Horrendous Haddock III (son of the Chief of the Hairy Hooligans), tries to pass the important initiation test of his Viking clan by catching and training a dragon. As you do.

Great adventurous fun with a powerful lesson about staying true to who you are.

Now over 60 years old, this is another timeless classic.

The story follows Tom, who’s transported back to an old garden where he meets a lonely girl named Hatty.

Tom returns to the garden every night for lots of adventures with Hatty, who mysteriously grows a little older each time he visits. As the summer comes to an end, Tom realizes he wants to stay in the garden with Hatty forever. Whist this book may not work for all modern 7 year olds, it’s an enchanting story with real characters.

18 – The Tale of Emily Windsnap

Liz Kessler’s The Tale of Emily Windsnap is definitely one for mermaid lovers!

The tale of a young girl, who learns she’s half mermaid, the story takes us on an exciting undersea adventure full of of shipwrecks, family secrets, loyal friendship, and ultimately the power of love.

19 – The Wolves of Willoughby Chase

Joan Aitken is one of the most respected writers in children’s literature and in The Wolves of Willoughby Chase, cousins Bonnie and Sylvia and their friend Simon the goose-boy set forth to battle against the evil schemes of their governess, Miss Slighcarp, and their boarding school teacher Mrs. Brisket.

It’s a good old fashioned adventure from a different place and time, but ‘might’ be a little dark at times for younger kids who are on the sensitive side (publisher recommends it for 8 and over).

A modern witch for the modern 7 year old! Who will be crowned the the next Top Witch of Ritzy City?

Sibeal Pounder’s Witch Wars brings you witches, spells and shrunken heads, but also some killer shoes and a big dose of silly riddles!

If your 7 old isn’t a fan of the kids’ classics, this is modern witchy fun, full of magic and entertaining silliness…

21 – Amelia Fang and the Unicorn Lords

Author Laura Ellen Anderson is also a talented illustrator (she did the fantastic illustrations in Witch Wars) and in Amelia Fang and theUnicorn Lords, she brings you a gothic fantasy with a big hearted vampiress!

Follow Amelia Fang and her pals (including the pet pumpkin Squashy) as they travel to the terrifying Kingdom of the Light to try to find Queen Fairyweather. Expect unicorns and fairies and lots of spooky fun. Recommended for fans of The Worst Witch.

So there you have it. Our list of 21 chapter books for 7 year olds. I hope the list gives you some renewed chapter book inspiration.

I wish you and your child much happy reading!

Previous Post: « 12 Genius Ways To Get Free Books For Kids
Next Post: A Fun New World: What Every Child Needs in their Garden »

Welcome to One Mum & A Little Lady – a trusted resource for sustainable, green living.

Our mission is to help you create a healthier, more conscious lifestyle, for you & your family, through actionable tips, eco friendly product ideas & research backed shopping guides. Read More >>>

One Mum & A Little Lady is a participant in the Amazon Services LLC Associates Program, an affiliate advertising program designed to provide a means for sites to earn advertising fees by advertising & linking to Amazon sites.